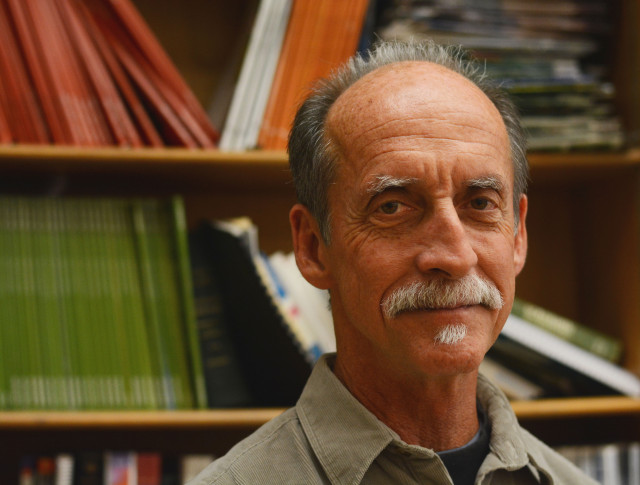 Dr. Reed Noss of the University of Central Florida poses for a photo. | DM Photo by Logan Kirkland

Reed Noss, a professor of conservation biology at the University of Central Florida, discussed key themes and concepts of modern conservation and how they have changed over the years Thursday at the Overby Center.

“We have really a bit of conflict, or even turmoil, going on within the field of conservation now,” Noss said.

He explained that some people feel what conservationists are doing –focusing on things like wildness or biodiversity – is inefficient. They instead emphasize the importance of maintaining the services the ecosystem provides for people.

Noss said he believes the most critical global problem we face is the extinction of species, and that it needs to be addressed.

Biological diversity remains extremely important because it helps slow down the rate of extinctions, according to Noss.

“We do have to have arguments that appeal to not just our fellow scientists and conservationists but to the general public,” he explained.

Noss said natural history is a good concept for conservation because it is important to know how plants and animals live in order to manage a landscape to prevent their extinction.

“That has an immediate importance,” Noss said. “We need to learn more about nature.”

Noss said he hopes students and professors will take what was presented and apply it to what they are studying, putting it into a broader historical context.

“They’ll see how that research fits into the bigger picture,” he said.

Noss said he understands there are a variety of conflicts when it comes to conservation themes and concepts, and will continue to research and explore them in order to find which concept is the most effective for both the environment and for people.

“It’s really time we start to reconcile these competing notions and try to get along and move forward,” Noss said.

Noss said these ideas are important for students here in Mississippi, as they are part of the Southeastern Coastal Plain, which contains the entire state of Mississippi. The plain is named Hotspot No. 36 and it contains 1,816 endemic plants, high endemism in some invertebrate groups and many other contributing factors.

In order to become a global biodiversity hotspot, there must be at least 1,500 endemic plants in a particular region, and there has to be a 70 percent habitat loss.

“Things that happen here are not just a problem locally,” Noss said. “They are a problem globally.”

Dr. Steve Brewer, a professor in the biology department, said the department wanted to bring a well-known and respected conservationist and biologist to speak about issues in the field.

Brewer said a lot of Noss’ work focuses on trying to figure out ways to solve problems for endangered species and helping to maintain biodiversity.

Thomas Moorman, a sophomore international studies major, said there were a few things he was surprised to learn through Noss’ lecture.

“I had no idea of the current situation amongst conservationists,” Moorman said. “I just assumed that if you liked nature, you just wanted to protect nature.”

Moorman said both of his parents are wildlife biologists and he felt that this would be an important lecture to attend since he has been exposed to different environments.

“It’s something that I feel called to do given my particular interests,” Moorman said. “It seemed like a really good thing to come to, and I was not disappointed.”